After the harsh defeat in the Coppa Italia final AC Milan want to bounce back with a win in the league against a direct rival for Europa League qualification like Atalanta.

Yesterday Gianluigi Donnarumma released an interview commenting his mistakes against Juventus while today he will have to show that that performance was just a (big) false step and redeem himself. Despite all, he is confirmed for today’s game. The only doubt in defense remains the presence of Davide Calabria who in recent months has shown physical fragility in close games. In any case, Ignazio Abate is ready and ready to contribute.

Few doubts also in midfield, with Franck Kessie and Giacomo Bonaventura, both former Atalanta players, sure of their place. Even Manuel Locatelli could be confirmed: unlikely the use of the former captain Riccardo Montolivo, while Lucas Biglia, who was tried in yesterday’s last training session could make his return after a muscular injury.

In attack, Suso and Hakan Calhanoglu are sure to start from the first minute. The usual doubt for the starting striker. Patrick Cutrone seemed to be in advantage over his department colleagues but coach Gattuso wan to give another chance to Nikola Kalinic. Andre Silva is also expected to make an appearance in the second half. 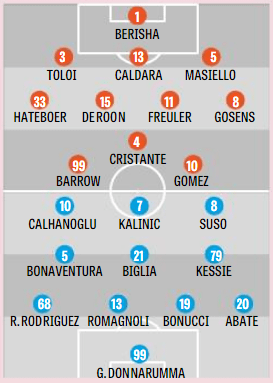