A false step at San Siro with AC Milan conceding two goals in the first half giving the Gunners the advantage in the Europa League last 16 tie.

According to some, Milan could have done more, much more , according to others Arsenal was a too strong and well organized opponent. Certainly those who could give something more in such a long-awaited and prestigious challenge are some of Gennaro Gattuso’s individuals who disappointed expectations and from which a better performance was required. A glimpse of the real Milan and too few quality plays to put pressure on Arsene Wenger’s team, in crisis but certainly not an identity crisis.

As usual, La Gazzetta dello Sport published the ratings and individual assessments for each AC Milan player on the pitch in last night’s match at a sold out San Siro. Ratings rather low for one evening, something that had not happened in the last 13 games without defeat to which AC Milan was accustomed. Gianluigi Donnarumma is the only one who shined yesterday (6.5) and Alessio Romagnoli’s performance (6) was just enough to limit the fast Welbeck. Total flop the rest of the players with some quite surprising.

Among the worst on the pitch are AC Milan’s best players: A destructive 5 for Suso and Calhanoglu, literally disappeared and never incisive in the attack game. Davide Calabria (5) was another tremendous flop incompetent on the right wing and loses the ball that generates 1-0 advantage for the guests. Cutrone initially (5,5), and Kalinic with Andre Silva later (both 5), are too isolated up front. After much praise in recent games Lucas Biglia flops too thanks to the cage that Wilshere and Ramsey build in the setting phase. 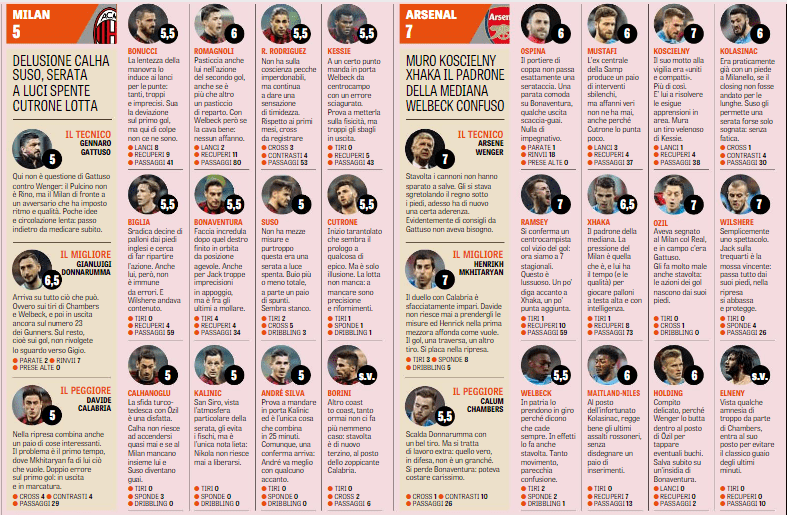