With the semi-finals of Coppa Italia secured AC Milan must face another big challenge today, this time in Serie A against direct rivals Roma.

After the fine performance against Napoli it’s time for AC Milan to face another direct opponent in the Champions League race. The Rossoneri have advanced in the Coppa Italia semi-finals and currently hold the fourth place in Serie A. Roma on the other had were crushed by Fiorentina 7-1 in the cup and a negative result on Sunday would likely bring the sacking of coach Eusebio Di Francesco.

For Roma-Milan, coach Gattuso will rely on his usual starting eleven. The in-form Gigio Donnarumma has a difficult job between the posts. Musacchio and captain Romangoli form the central duo in defence while on the left returns Ricardo Rodriguez with Davide Calabria on the right.

No changes in midfield. Bakayoko teams up with Frack Kessie and Lucas Paqueta. The French midfielder has been of the best Rossoneri players in recent months but his colleague, Kessie, has underwhelmed a lot in the last games. It’s up to Paqueta to inject imagination and creativity to the Rossoneri’s game.

Without a single doubt, Rino will start from the first minute Krzysztof Piatek in attack. The Polisht striker was simply impeccable against Napoli scoring a brace that qualified Milan to the next stage of the Coppa Italia. Suso should return from the first minute in Roma-Milan. Gattuso decided to rest him in the cup so the Spaniard winger must be fresh. Calhanoglu completes the department. 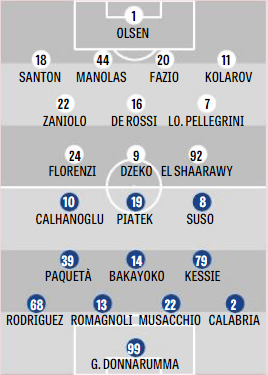