AC Milan grab a much needed win against Chievo displaying their full attacking potential and thrashing the local side of Verona 1-4 along the way.

Striking win from the rossoneri of Vincenzo Montella, who demolish Chievo Verona 1-4 away from San Siro. A success in the league was missing from 20 September, furthermore it’s an important result that will inject confidence in the team considering the big match on Saturday against Juventus.

The absolute protagonist of yesterday’s match played at Marcantonio Bentegodi Stadium was Jesus Suso, who scored a goal and provided an assist and contributed considerably in the other two goals. La Gazzetta dello Sport indicates him as the best on the field and awards him a well deserved 8. The second best among AC Milan players is Alessio Romagnoli, who ears a 7 rating for having optimally controlled each opponent striker, replacing Leonardo Bonucci in the best possible way.

6.5 ratings for Gianluigi Donnarumma (great save on Tomovic), Hakan Calhanoglu (goal and excellent signals throughout the game) and Nikola Kalinic (goals and an encouraging performance). 6 rating for all the other, except for Lucas Biglia. The Argentine’s performance deserves a 5.5 rating for being too ordinary and banal in the middle, as well as having lost two risky balls that could have cost a lot. From the former Lazio much more is expected, starting from next Saturday against Juventus. 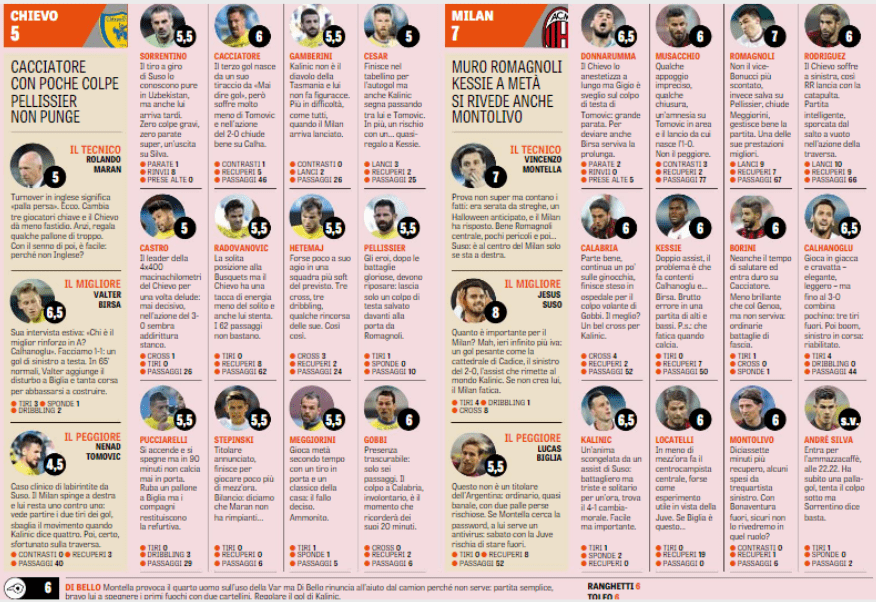