Despite Kessie’s opener, Atalanta’s late equalizer leaves 6th place at stake in the last game of the season but AC Milan have already secure Europa League qualification for next season.

The single point earned by AC Milan yesterday had a positive impact, because it secures Europa League football for the Rossoneri next season and the reaction after the Coppa Italia humiliation was something to be appreciated.

Even Gennaro Gattuso was surprised by how the Rossoneri approached the game, without fear and with the right attitude. A fairly comprehensive performance throughout the pitch, but the feeling that too many AC Milan players, especially in the final moments of the match, lowered their level showed little concentration and a poor continuity in individual performances.

As usual, La Gazzetta dello Sport publishes the ratings for each AC Milan player part of yesterday’s game. Many flops among the Rossoneri: 4 for former captain Riccardo Montolivo, entering the game in the second half and leaves his team in ten after a foul on Papu Gomez. Underwhelming also Donnarumma, Abate and Rodriguez, all rated 5 for their disappointing performances.

Obviously, for his goal and for the entire display the best among the Red and Blacks is Franck Kessie (7), able both in defending and in pushing forward. Good game even by Nikola Kalinic (6) much better than the last match with Juventus, he fights for every ball, tackles and is always present up front. Yesterday’s Milan again lacked the quality of Suso, off and inaccurate: gray moment for the Spaniard. 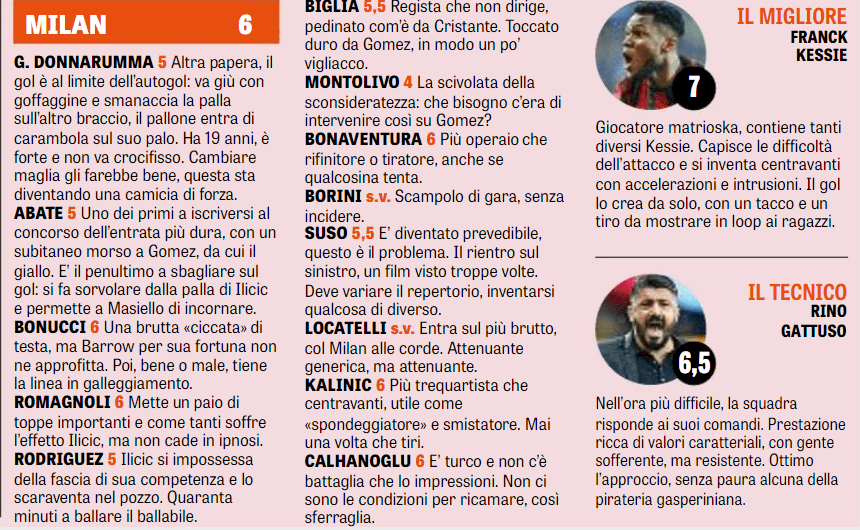 Read here Bonucci: “At the beginning of the year I had a different thought on Milan’s season”