The red and blacks take three precious points by defeating Cagliari 2-1. A suffered result but the rossoneri manage to grab the sixth consecutive win with the decisive contribution of the “veterans” who  gave more power to the whole team. It’s important to know how to win even when suffering.

Not an excellent test, due to the imprecision of many elements on the field, and to a sure-looking and well-placed Cagliari, able to equalize and put under pressure the rossoneri’s midfield for much of the match. But some games, difficult and undecipherable, are decided by a shot of genius and by the character of the best on the field.

As usual, La Gazzetta dello Sport has published the ratings of last night’s meeting in San Siro won by AC Milan. From the rossoneri the best is Suso, with a 7.5 rating for both his assist and his decisive goal. One of the most positive is Patrick Cutrone, author of the first goal that puts him in a state of grace. A 7 rating for the young bomber, while a satisfying 6.5 for an excellent Riccardo Montolivo, who struggles like the rest of his teammates but deserves praise for some excellent ball recovery in old school midfielder style.

Sufficient all elements of the defense, including a Bonucci, that at times experiences some unexpected lightness. But the real flop is the entire midfield department: Hakan Calhanoglu gets a full 5 for an error prone appearance, while 5.5 for Franck Kessie, who makes a surprise mistake in the equalizer goal from the opponents. The young midfielder manages to find the necessary strength and is capable of growing in the final moments of the game. 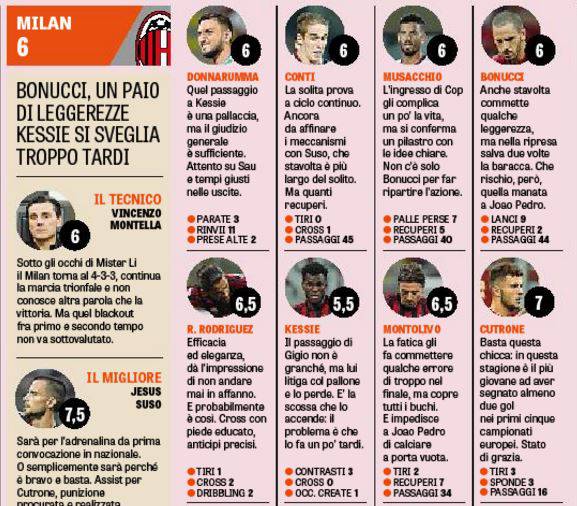 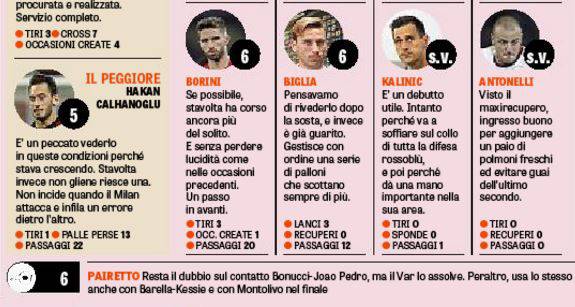