AC Milan host Chievo Verona on Sunday at San Siro today. The Rossoneri want another positive result to continue their climb in the standings.

The Rossoneri thrashed Sassuolo 4-1 in Serie A and followed it with another positive result 3-1 against Olympiacos in Europa League. Now it’s time for Gennaro Gattuso’s boys to grab a third victory before the international break.

The last two games have offered good indications to Rino and the starting eleven for Chievo is almost clear. Gigio Donnarumma returns in goal after Pepe Reina’s start in Europa League. There are three doubts in defense. Only Musacchio is guaranteed to start from the first minute. Romagnoli has suffered a slight injury but he should make it. Otherwise Zapata will replace him. The situation is more complicated on the flanks.

Diego Laxalt seemed favorite over Ricardo Rodriguez on the left but in the last training session the Swiss full back was tried in the starting eleven. While on the right Gattuso is considering handing Ignazio Abate another starting jersey. Rodriguez and Calabria featured in Europa League however their presence seems in doubt for Chievo.

The usual trio in midfield. Franck Kessie will be seen again alongside Giacomo Bonaventura and Lucas Biglia while Tiemoue Bakayoko returns on the bench after the very disappointing display with Olympiacos. Gonzalo Higuain will lead the attack, the Argentine seems fully feet after staying out for two games. Suso and Hakan Calhanoglu will support him on the wings. Fans are pushing for a Cutrone-Higuain duo up front but the young Italian must wait for his opportunity like he did in Europa League. 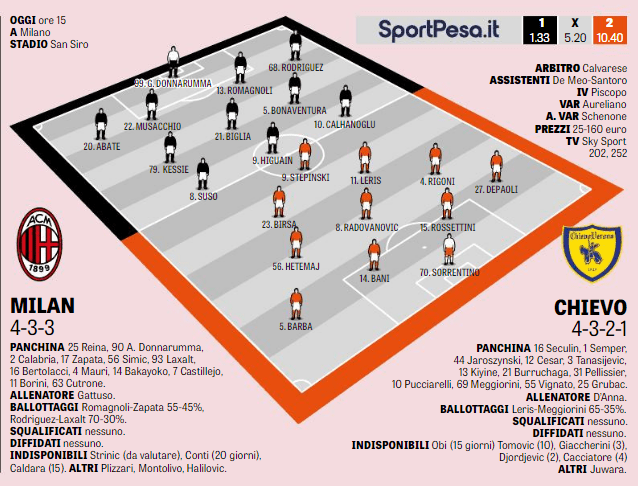