AC Milan are in search of three important points against a surprising Parma who has currently occupies the 6-th place in Serie A.

In a few hours AC Milan will host Parma at San Siro. Another important match for the Rossoneri, who can not lose ground in the Champions League race. Only one point separates the Rossoneri from Lazio who currently hold the forth place in the standings.

There were many doubts on what type of formation would Gattuso use but today we can confirm that Rino has settled for the 4-3-3. For the first time this season Gattuso will use Ignazio Abate as central defender. The unprecedented injury crisis has forced the coach to make drastic choices. At his side should be Cristian Zapata, with Davide Calabria and Ricardo Rodriguez as full-backs.

In midfield Tiemoue Bakayoko seems fully recovered after a slight injury in Europa League. He should start from the first minute with Franck Kessie at the middle. After the fine appearance in Europe, Gattuso will give another chance to Jose Mauri.

In attack, Gonzalo Higuain is suspended so Cutrone will try to replicate his Dudelange performance with Suso and Calhanoglu on the flanks. In yesterday’s press conference Gattuso confirmed that both Cutrone and Calhanoglu are fully fit for Milan-Parma. 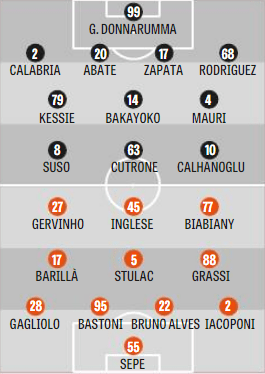