AC Milan host Torino today at San Siro in a very important match that can bring the Rossoneri closer to Champions League qualification.

With both Lazio and Roma failing to win yesterday, AC Milan have the chance to deepen the distance and cement their fourth place in the Serie A standings. In case of victory the Rossoneri would be just one point behind city-rivals of Inter that currently occupy the third position. That’s why Milan-Torino is a must win match at all costs.

Torino have performed well so far and have a very good attacking unit. Still, considering the home support, Gennaro Gattuso’s team will play only for three points that could be decisive in the Champions League race.

Great news for Milan, after two games of suspension Gonzalo Higuain is back. Out against Lazio and Parma, El Pipita will start from the first minute despite some back pain. The return of Higuain has forced coach Gennaro Gattuso to change formation and use again the 4-4-2 lineup, with Patrick Cutrone at Higuain’s side with the usual familiar behind them. Suso and Hakan Calhanoglu are back in midfield with Frank Kessie and Tiemoue Bakayoko in the middle.

In defence, Ignazio Abate is confirmed as central defender after the excellent display against Parma next to only survivor Cristian Zapata. Davide Calabria on the right and Ricardo Rodriguez on the left. As usual Gianluigi Donnarumma between the posts. 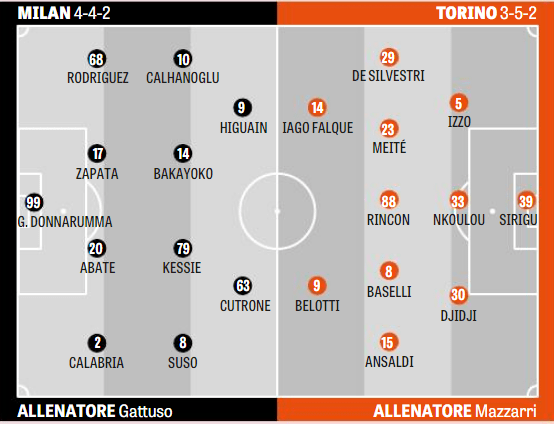