After the Europa League success in Vienna AC Milan return to play Serie A football. The rossoneri host Udinese in San Siro, today at 15:00 CET.

The victory in Vienna has allowed AC Milan to quickly turn page after the defeat against Lazio. Excellent performance from the rossoneri: in addition to the five goals, the team has given signals of tactical compactness with the 3-5-2 formation that will take the place of the old 4-3-3 module from now on.

Vincenzo Montella is also ready to confirm it against Udinese valid for the 4th round of Serie A (scheduled for Sunday at San Siro at 3 pm CET) but with different players. According to reports by La Gazzetta dello Sport, Andre Silva and Hakan Calhanoglu, protagonists in Europa League, will stay on the bench. A choice that may not convince fans and not just because the two need continuity.

In their place, Giacomo Bonaventura and Jesus Suso will return from the first minute. The Spaniard should play with Nikola Kalinic in attack, while the former Atalanta completes the midfield with Lucas Biglia and Franck Kessie. On the wings, Andrea Conti will miss most of the season so it’s Ignazio Abate’s duty to replace him on right whith Ricardo Rodriguez (absent in Vienna for technical choice) to the left. Leonardo Bonucci will lead the defense accompanied by Alessio Romagnoli and Mateo Musacchio.

Luigi Delneri should deploy Udinese with the 4-3-3. Bram Nuytinck confirmed in defense along with Danilo. Jakub Jankto, wanted by Milan in the last few days of the mercato (read here), will occupy the usual midfield position on the left. The attack will be led by Maxi Lopez, with Kevin Lasagna and Rodrigo De Paul on the wings. 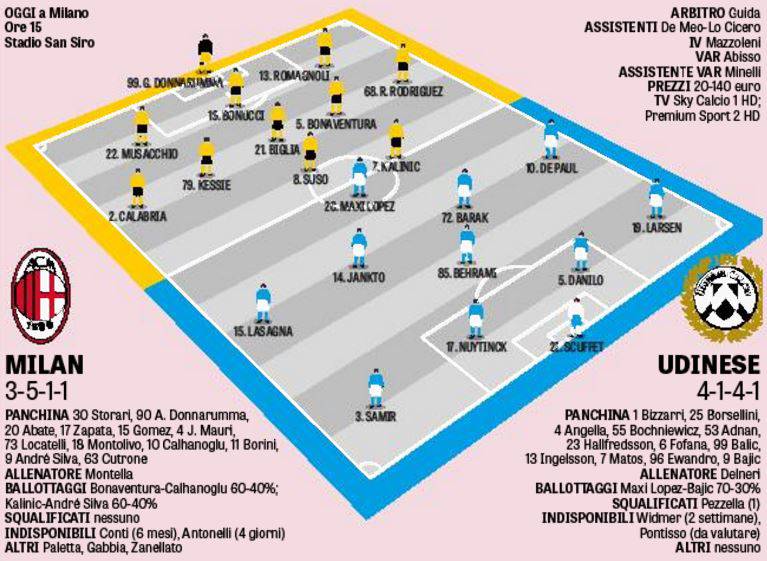