Today AC Milan make their Serie A debut in the second round of the Italian championship against Carlo Ancelotti’s Napoli.

The Rossoneri were absent from the first week of Serie A and AC Milan vs Genoa has slipped for October. The Red and Blacks will now make their debut today at 20:30 CET at the San Paolo stadium against Napoli. Gennaro Gattuso has already  started preparations for the upcoming encounter against his former coach.

The starting eleven of the Rossoneri begins to take shape. The doubts are now few: Gianluigi Donnarumma will be between the posts, with Pepe Reina who will assist from the bench his return to the San Paolo. In front of Gigio will start Davide Calabria, Mateo Musacchio, Alessio Romagnoli and Ricardo Rodriguez. Mattia Caldara will be on the bench, he has yet to study the mechanisms of Gattuso and improve his on-pitch relationship with Romagnoli. Gattuso currently wants to rely on Musacchio.

Hakan Calhanoglu is suspended for this game and in his place was expected to debut Tiemoue Bakayoko as inside left in midfield with Giacomo Bonaventura up front in the attacking trio. However, Rino has changed his mind and Jack will return in midfield alongside Lucas Biglia in front of the defense and Franck Kessie. In front, Fabio Borini starts on the left, Suso will act from in his usual position on the right, while another former Napoli like Gonzalo Higuain starts as centre foward. 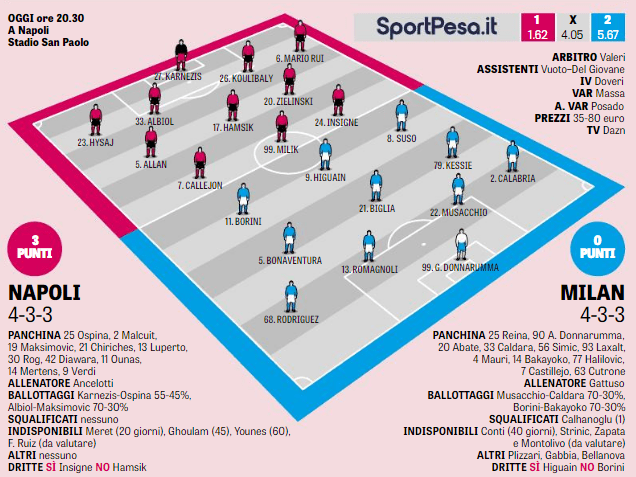 Read here Top 10 most expensive transfers of the summer