Today at the Olimpico stadium AS Roma host AC Milan in the main event of Serie A round 26. A big match between two teams fighting for a Champions League spot.

The Rossoneri in just seven days will challenge Roma, Lazio (both away) and Inter. Without forgetting the Europa League encounter with Arsenal on Thursday 8 March. Gattuso at the press conference reiterated his complete focus in today’s challenge against the Giallorossi, without spending any words on the next challenges.

Gattuso will deploy the usual lineup with Gianluigi Donnarumma between the posts. In front of him the defense of 4 with Leonardo Bonucci and Alessio Romagnoli at the center. On the flanks certain the presence of Ricardo Rodriguez on the left, while on the opposite side Davide Calabria seems to be favorite over Ignazio Abate. The young Rossoneri fullback has completely recovered from slight fatigue at the beginning of the week.

In midfield, except for the challenge against Sampdoria, returns the usual trio composed of Franck Kessie (suspended against Samp), with Lucas Biglia in front of the defense and Giacomo Bonaventura as inside left. In attack there are even fewer doubts: the trident will see Suso and Hakan Calhanoglu on the wings, with Patrick Cutrone at the center of attack. No chance for Andre Silva or Nikola Kalinic, who recovered only a few days ago from the pubalgia that kept him out of the fields for over two weeks. 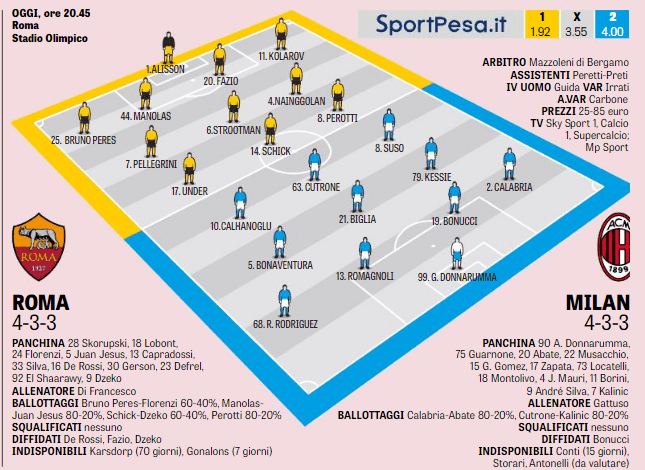