Former Barcelona and AC Milan star Ronaldinho spent one month in a Paraguay prison for the use of fake passports together with his brother.

“There were Ronaldinho, a thief and a killer who played football“. It seems like the beginning of a joke but it is the reality of what happened recently in the Paraguayan prison where the Brazilian was detained for possessing false passports.

Ronaldinho passed his time in the detention facility playing in football tournaments and footvolley matches with other inmates. MilanNews.it reports that the legendary number 10 lost his last match in jail.

Ronaldinho was paired with another inmate, against two former policemen who were arrested for murder and robbery respectively. The good news is that the Brazilian star was released from jail afterwards.

Yesterday judge Gustavo Amarilla granted house arrest to the former AC Milan attacking midfielder after Ronaldinho paid a bond of $800,000. Both men were being held in a prison in Asuncion but from now on they will remain in a hotel in the Paraguayan capital while they continue to be investigated.

“Ronaldinho and his brother entered the country at 9.05 a.m. on a commercial flight which landed at Silvio Petirossi International Airport. They entered using a Paraguayan passport which was authentic but contained false information,” public prosecutor Federico Delfino said in a Facebook post at the time. 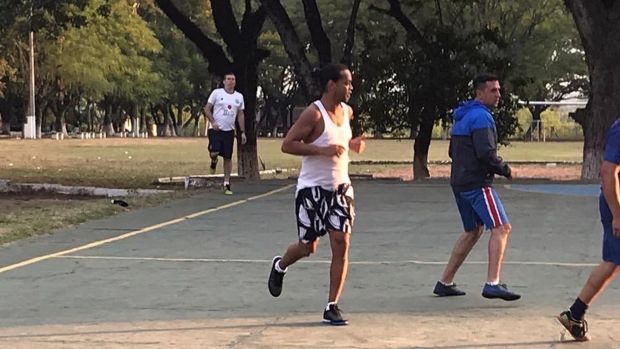 Ronaldinho, whose real name is Ronaldo de Assis Moreira, was arrested along with his brother Robert by Paraguay’s national police on March 4 for possessing various fake documents, including ID cards and Paraguayan passports in the men’s names revealed BBC.

The Brazilian wizard made club 529 appearances over his 17-year playing career, turning out for a host of top European football clubs, including AC Milan, Barcelona, Flamengo and Paris Saint-Germain.