Another away challenge for the Rossoneri. Today Gattuso’s AC Milan travels to Sassuolo to face a traditionally difficult opponent like the local side.

The situation is tense at Casa Milan. The recent string of disappointing results is having an effect on the players and there is a real risk that the squad may suffer mentally if another negative results follows. For that reason the entire management and the coach are staying close to the team offering their unconditional support for tomorrow’s challenge with Sassuolo.

If the results weren’t enough of a problem coach Gattuso must also deal with an emergency in attack. Only a few changes in defense. Donnarumma will start as usual between the posts but the four defenders in front of him will change a bit. Romagnoli and Musacchio while situation on the flanks is a bit more complicated. Abate should start on the right because the coach wants to give Calabria a rest after two consecutive troubling displays.

Diego Laxalt made an excellent display against Empoli but it seems as if Rino is looking for more coverage in defense for Sassuolo. At the moment Ricardo Rodriguez is in advantage. On the other had Caldara is still battling with a physical problem and should be available for next week’s Europa League match versus Olympiacos.

No changes are expected in midfield with Lucas Biglia, Giacomo Bonaventura and Franck Kessie to start from the first minute. However, Gattuso confirmed in today’s press conference that he may decide to change formation or players depending on the situation of his strikers.

In attack there is a real emergency. Gonzalo Higuain is still feeling and has remained out pain while Patrick Cutrone is not yet fully fit to start from the first minute. Coach Gattuso also informed today that Borini has suffered an ankle injury so his presence for tomorrow is in doubt. The only certainty is the start from the first minute of Suso and Calhanoglu. If Borini doesn’t make it, as it seems, Samu Castillejo will lead the attack as a false nine. The former Villarreal will make his first minute debut in Serie A. 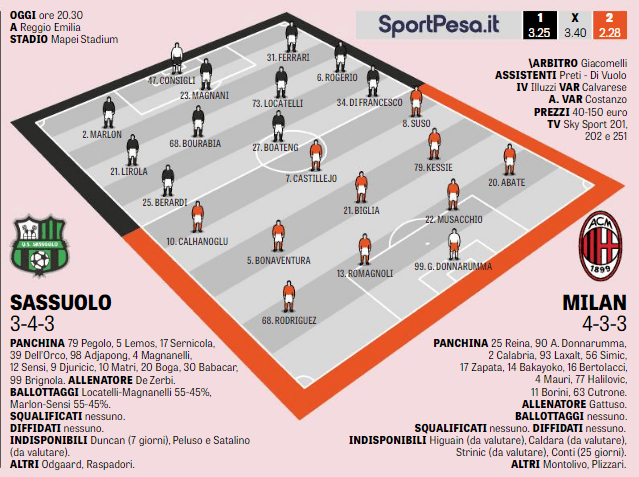