In response to FIFA’s The Best Spanish newspaper Marca has created The Worst and two AC Milan players make the cut.

It doesn’t take a genius to understand that last season was a very negative one for former captain Leonardo Bonucci. Especially in the first few months, during the management of Vincenzo Montella, the 31 year old centre back contributed to the underwhelming results of the team.

With Gennaro Gattuso in the second part of the season the defense was able to suffer less but the former number 19 often lacked concentration in decisive moments. The presence of Alessio Romagnoli by his side certainly helped him reduce errors but it was not enough to avoid him the prize as one of the worst defenders of last year, according to a special ranking by Marca.

The famous Spanish newspaper has nominated the worst 11 players with the most disappointing performances throughout the season, considering obviously the best known footballers. Together with Leo Bonucci, now part of Juventus, space in the defense of 3 also for Howedes (another Juventus) and Lindelof (M). Ozil, Sneijder, Bakayoko (now at AC Milan) and Ganso complete the midfielder while Alexis Sanchez, Ihenacho and Vietto form the attacking trio.

A survey for the worst coach is still ongoing. For the unprestigious award Marca has also nominated Vincenzo Montella, sacked in one season by both AC Milan and Sevilla. However, at the moment, Jorge Sampaoli former coach of Argentina leads the poll with 75% of the votes while further behind is Franck De Boer of Crystal Palace. 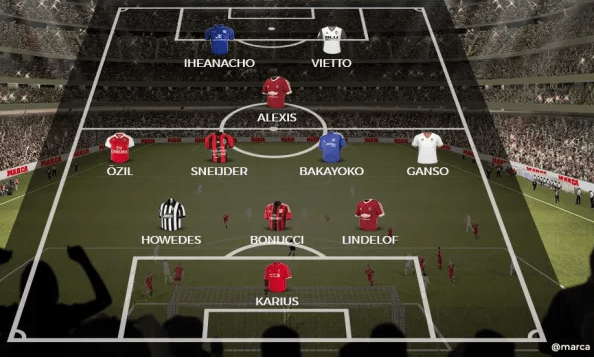