AC Milan host Spal at San Siro in a very delicate match for many season. Only three points could bring back tranquility to the Rossoneri.

Today at 20:30 CET, AC Milan face Spal in what may be the last chance of Gennaro Gattuso to save his bench. A decisive match not only for the future of Rino but also for the Champions League ambitions of AC Milan. The Rossoneri can not afford to continue to make mistakes or else a place in the top four is going to remain just a dream.

Coach Gattuso will make only a few changes for Milan-Spal. Donnarumma as usual between the posts with only one modification in the four man defence. Unlike the match with Frosinone, Cristian Zapata will take the place of Mateo Musacchio. The Argentine defender doesn’t seem fully fit after a long period out. Romagnoli, Calabria and Ricardo Rodriguez complete the back line.

The Frosinone experiment will be repeated even this time in midfield. Franck Kessie and Tiemoue Bakayoko form the central duo while Hakan Calhanoglu will be seen again as central midfielder. The Turkey international is at a tight spot just like coach Gattuso. Heavily criticized Calhanoglu has been one of the biggest disappointments of this season and many expect him to fare better in this remaining games or else he will be sold.

Jesus Suso returns for Milan-Spal. The Spanish right winger had suffered an injury and according to reports he risked staying out for several weeks however he is part of the squad list and should start from the first minute today. If Suso doesn’t make it then Cutrone will take his place. Samu Castillejo will play on the left flank with El Pipita Higuain at the center of the attack. 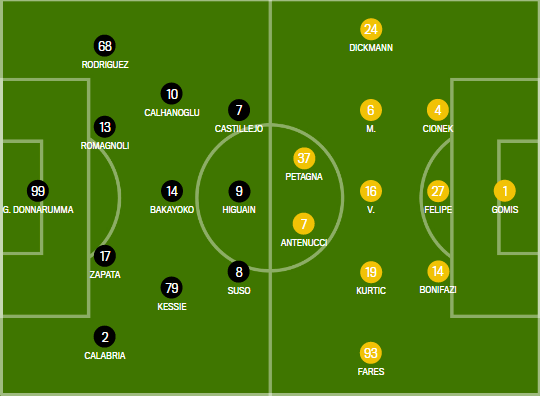