AC Milan make their Europa League debut in Luxembourg against F91 Dudelange. The Rossoneri must return to winning ways after the Cagliari fiasco.

Coach Gennaro Gattuso will rely on may new faces for Europa League’s opener Dudelange-Milan. The Rossoneri must quickly forget the disappointing performances against Cagliari and Dudelange represents a perfect opportunity to Rino and his squad to bounce back with a win. Dudelange is the first Luxembourg club to participate in the group stage of Europa League.

Gattuso aims for a total overhaul of his starting lineup. Only captain Alessio Romagnoli, author of a terrible display with Cagliari, will reprise his role as centre back. Mattia Caldara makes his official debut with AC Milan, the former Atalanta will form the central duo with Romagnoli. Ignazio Abate returns on the right while Diego Laxalt, after some good performances as a substitute, will start for the first time on the left. Pepe Reina between the posts.

Space for newcomers even in midfield. A familiar face like Bertolacci returns to play for the Rossoneri after a one year experience at Genoa on loan. The Italian will be accompanied by Jose Mauri and Bakayoko. The 22 year old Argentine midfielder made only 4 appearances last season and 3 where in Europa League.

In attack Gonzalo Higuain will be supported by Samu Castillejo and Fabio Borini. The Argentine striker was supposed to be rested for this game but Cutrone’s injury changed Gattuso’s plans. The former Villarreal has been electric on those few minutes he was seen on the pitch against Roma and Cagliari and is ready to challenge Suso in the future. The coach will also give Halilovic a chance to impress with the game in progress. 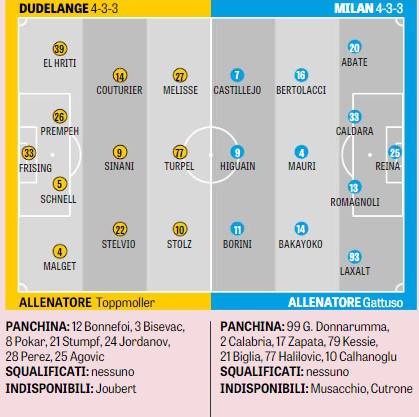