It was not easy but AC Milan tried and for some minutes seriously believed in the impossible. The European journey of the Rossoneri ends in London.

The Rossoneri convinced, by attitude, by humility and determination, but were punished by certain episodes and by that first match at San Siro that affected the entire qualifying issue. A less beautiful but very cynical Arsenal effective in securing progress to the next stage. Gennaro Gattuso praises his boys, even if someone would have expected a better performance.

As usual La Gazzetta dello Sport offers the ratings for all AC Milan’s performers yesterday. The best is certainly Fabio Borini, with a positive 6.5 obtained thanks to a careful and punctual defense outing against very insidious opponents. Good also Hakan Calhanoglu, who has the merit of reopening the qualifying discussion with a perfect rocket from outside the box. Not bad even the various Bonucci, Rodriguez, Kessie and Cutrone, the latter always generous even if not very dangerous.

There are no flops in the Rossoneri camp but an improper Suso (5,5), perhaps in need of rest and an Andre Silva who wastes the opportunity to revive Milan and his personal ambitions, stand out. Finally Gigio Donnarumma: a pity to condemn him, but after at least 3 beautiful saves he fails to properly hold the ball in Xhaka’s shot that paves the way for the victory of the Gunners. 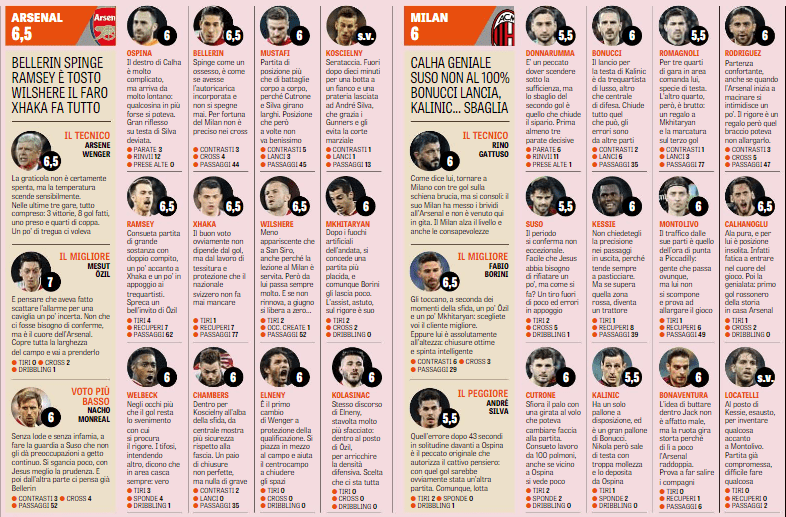 Read here Gattuso: “Proud of my players. The referee?…”