AC Milan challenge Genoa at San Siro today at 20:30 CET. Another positive result will allow the Rossoneri to break in the Champions League area.

Milan-Genoa, the opening match of Serie A, was postponed due to the tragic bridge collapse in the city of Genoa. Today at 20:30 both teams face in what will be the 10-th match for this season. Only 1 point separates the two teams in the standings however another win would allow AC Milan to enter the top 4.

Pleased with the win against Sampdoria, coach Gattuso will confirm the 4-4-2 formation and almost all of the starting eleven. Musacchio and Romagnoli compose the central duo while Ricardo Rodriguez and Abate on the sides. It has been confirmed that Mattia Calabria’s injury is quite serious and he will remain out for at least three months. Calabria was also injured against Sampdoria and will skip the next three games.

No changes in midfield with Lucas Biglia and Franck Kessie at the center. After a pleasing performance with Samp, Diego Laxalt is confirmed again as left midfielder while Suso will repeat himself on the right. Giacomo Bonaventura, another player battling with physical problems, is unavailable for Milan-Genoa.

The experiment with two strikers up front proved quite successful in the last match so normally Gattuso will use both Cutrone and Higuain from the first minute in Milan-Genoa. The two are in great form and the Rossoneri need their goals. 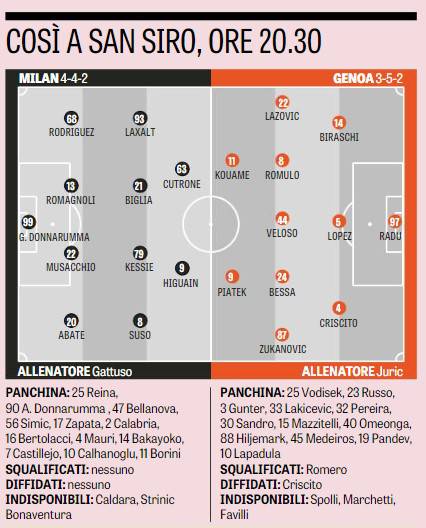