AC Milan-Sampdoria could be Gattuso’s last match at the helm of the Rossoneri in case of a negative result so the coach has opted for a hyper-attacking formation.

Following the recent disappointments with Inter and Rel Betis, coach Gennaro Gattuso intends to overhaul the game system for Sunday’s Serie A encounter against Sampdoria. A kind of revolution to get Milan back to winning ways and send away the sacking voices.

In defense Rino confirms the usual lineup of recent games. Captain Alessio Romagnoli and Musacchio form the central duo while Abate and Rodriguez complete the back line. Mattia Caldara yet again has remained out. The Italian centre back suffered a muscular injury in training yesterday and isn’t part of the 24 man squad list but Andrea Conti returns. Gigio Donnarumma between the posts.

Innovation in midfield with Kessie and Lucas Biglia at the centre but with Suso as right midfielder and Bonaventura on the opposite flank. The Spaniard must dialogue more with the midfielders and contribute more then usual in defense. The Italian returns to play as left midfielder after a long period at the center. Gattuso counts a lot on the wings to provide for the strikers.

For the first time this season we will see Patrick Cutrone and Gonzalo Higuain play both from the first minute. The Italian has scored 4 goals so far with an average to envy of one goal every 40 minutes. It’s impossible to keep on the bench a striker with such statistics. El Pipita needed a partner up front so hopefully the experiment will work. 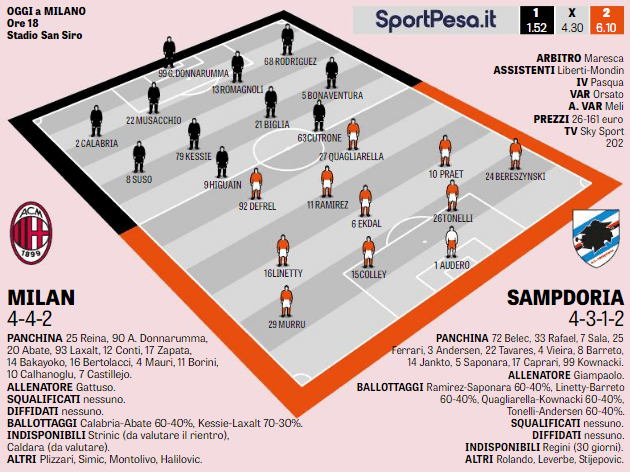