AC Milan edge past Dudelange thanks to Gonzalo Higuain’s goal in the 59th minute. The Rossoneri start their Europa League campaign with a win in Luxembourg.

The Rossoneri kick-start their Europa League campaign with a narrow win in Luxembourg. A brand new Milan, full of players who made their first minute debut and others who saw their name in the starting lineup after a long time out. Yet again El Pipita decides the match for Milan.

Yesterday’s performance can be considered a good one for Gennaro Gattuso’s team because it was practically Milan B on the pitch. A better result was expected but still we are only at the beginning of the season, a lot of works remains to be done. The newcomers are continuing their integration while the old guard needs to be ready every time it is called into action. At the end of the game, the Rossoneri leave Josy Barthel stadium with three points.

As usual La Gazzetta dello Sport publishes the ratings for yesterday’s performers. Man of the match was without a doubt Gonzalo Higuain. Praises for the Argentine striker author of the winning goal. The 30 year old seems to have settled well and for the third match in a row is decisive for Milan. 6.5 for him but also for Samu Castillejo, lively though chaotic, and Timoue Bakayoko, already at ease in midfield.

Pepe Reina and Mattia Caldara, both 6, made their official debut with AC Milan. The Rossoneri defense is well placed and rarely faces any risk despite the aggressive start of Dudelange. The display of Jose Mauri and Fabio Borini, both 5,5, was underwhelming to say the least. The two fail to offer intensity and work in midfield. But there was someone who did even worst, Andrea Bertolacci (5), was totally lost in his position, opaque and lacked the necessary creativity to lead AC Milan’s midfield. 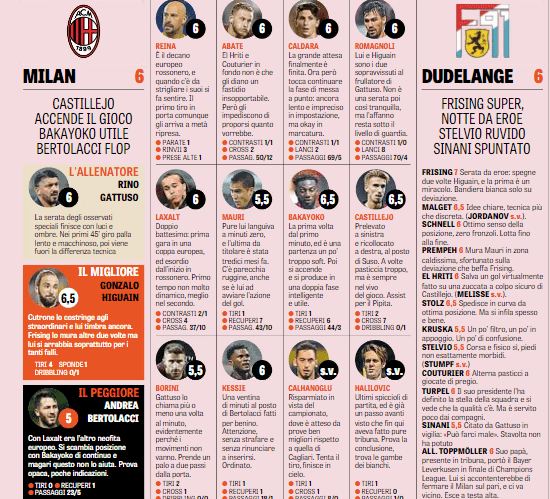 Read here “I left Milan because i was not worthy anymore”