AC Milan need a win at all costs against Genoa in a busy Serie A weekend that could prove crucial for Champions League qualification.

This Serie A weekend will be crucial for the Champions League hopes of many clubs. Atalanta host Juventus while Napoli face Inter. That’s why a victory in Milan vs Genoa, at the Luigi Ferraris stadium, is a must for the Rossoneri who have the chance to widen their distance with the followers.

Coach Stefano Pioli will have nearly his entire players at his disposal besides Davide Calabria (should stay out for one week) and Zlatan Ibrahimovic that is suspended for one match after the red card against Parma.

With Calabria injured, Pioli has the usual doubt on the right. This time he is oriented to choose Diogo Dalot over Pierre Kalulu. Despite Romagnoli having fully recovered, the Italian coach does not think of breaking the Kjaer-Tomori partnership at the enter of the defence. As usual Theo Hernandez on the left completes the back four.

The central duo will be the same that did great things in the first half of the season. Ismael Bennacer is slowly gaining his best form and will play alongside Franck Kessie. Alexis Saelemaekers, Ante Rebic and Hakan Calhanoglu form the attacking trio behind the striker.

For Milan vs Genoa, Pioli will rely on Rafael Leao to lead the attack in Ibrahimovic’s absence. Thankfully, Mario Mandzukic has fully recovered and will be able to contribute in the second half. 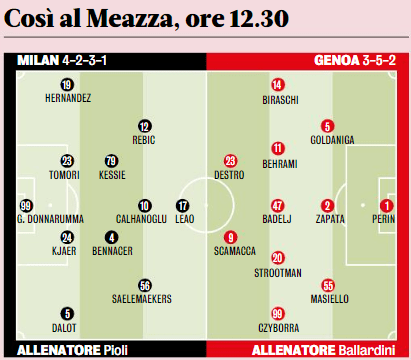