Gennaro Gattuso is preparing a lot of changes for the next match against Bologna. A new AC Milan will search for the first three points with Rino at the helm.

Next stop, Bologna. New AC Milan coach Gennaro Gattuso is still searching for his first victory at the helm of the rossoneri. After his two disappointing outings against Benevento and Rijeka, Rino has decided that the red and blacks will no longer player will three centre backs and in Sunday’s match returns the old 4-3-3 formation used for the entire last season.

Against Bologna returns the 4-3-3 and many pillars of last season make an appearance. Gigio as usual between the posts. As already mentioned no more three central defender at the back. Against Bologna captain Bonucci will partner Musacchio, deployed from the first minute after Romagnoli’s red card against Benevento. An excellent chance for the Argentine to demonstrate that he deserves more minutes this season. 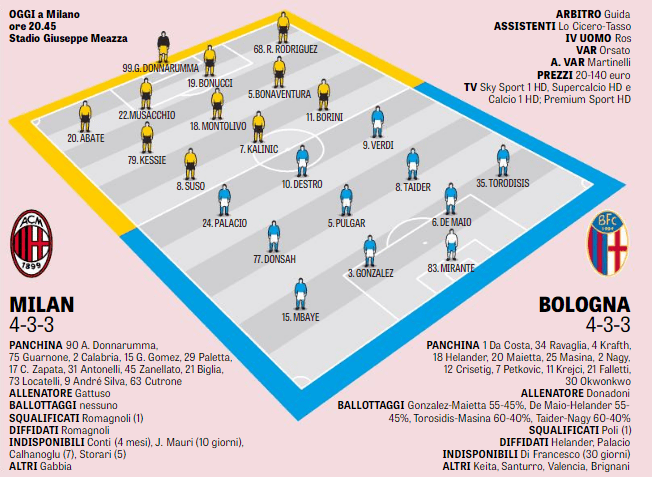 In midfielder Lucas Biglia will remain again on the bench while former captain Montolivo starts in his place alongside Kessie and Jack Bonaventura who returns to play as midfielder rather than as winger. It’s Fabio Borini who takes his position up front, who together with Suso will support sole striker Nikola Kalinic. Three points are an obligation for the rossoneri.

Read here All Milan players that will leave in January