The first leg of the Coppa Italia semifinals ends in a stalemate. Despite some good opportunities the Rossoneri fail to finalize. Return match in Rome in a month’s time.

It’s a 0-0 that leaves a bitter aftertaste to the Rossoneri who failed to convert a clear-cut chance that could have given them the win, important also with the return match to be played at the Olimpico in Rome on 28th February. But it’s still a positive result fort Gattuso and his boys who managed to keep a clean sheet against an inspired Ciro Immobile. The defence showed great solidity and Donnarumma made a brilliant save to deny the visitors in the second half.

Like always La Gazzetta dello Sport has published the reatings for each Rossoneri player and indicates Gianluigi Donnarumma (6.5) as the best of the Rossoneri team. His save on Ciro Immobile’s header was miraculous and decisive. 6.5 also for Leonardo Bonucci and Patrick Cutrone. The AC Milan captain is attentive and leads the defense well, without making any mistakes. The 20 year old striker enters in the second half and heats the game. Runs, presses and almost scores.

6 for Ignazio Abate (unable to face opponents like Lukaku and Anderson), Alessio Romagnoli (two errors on Immobile, but otherwise impeccable), Fabio Borini (careful in the unprecedented role of left-back) and Franck Kessie (quantity yes, quality not yesterday). Many players are rated under 6, including Lucas Biglia, a bit ‘too slow’ and not very illuminating, Suso (less sparkling than usual, and Giacomo Bonaventura (not a brilliant night for Jack), 5.5 for them three, while Manuel Locatelli, Nikola Kalinic and Hakan Calhanoglu flop at just 5.

The young midfielder makes only 17 passes, is not very incisive and is extraneous to the attacking maneuver of the team. The Croatian striker does not go beyond a few headers, is not dangerous and never kicks at the goal. The Turkish is criticized for the clamorous error with the empty goal that could have delivered AC Milan victory over Lazio. 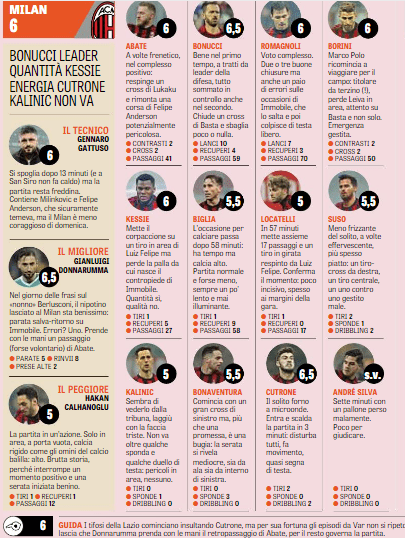