Another match within a few days for AC Milan. Today at San Siro the Rossoneri face Sampdoria after the pleasant European trip to Bulgaria.

The four defenders in front of Gianluigi Donnarumma will be different compared to the last Europa League match. The central pair does not change, with Leonardo Bonucci and Alessio Romagnoli untouchable but on the flanks, Davide Calabria returns to play on the right, where he seemed much more comfortable these months compared to the left. Ignazio Abate will be on the bench. He appeared not at the top of his form in the European trip to Bulgaria. Ricardo Rodriguez returns on the left from the first minute.

Coach Gennaro Gattuso is forced to make some changes in midfield. Franck Kessie will not be available for this match due to suspension. In his place there should be one between Riccardo Montolivo and Manuel Locatelli, with the former captain being in advantage both according to La Gazzetta dello Sport and Sky Sports 24.

The usual suspects complete the department: Lucas Biglia and Giacomo Bonaventura. No changes instead in the offensive trident, with Hakan Calhanoglu and Suso on the wings supporting the man of the moment, Patrick Cutrone. 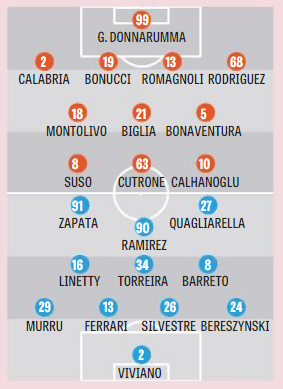